It seems that VR(virtual reality) has come into our life strongly. Most of you probably have had a Samsung Gear VR, HTC Vive, Oculus Rift yet for immersive and sensory experience. To make your 3D enjoyment more conveniently, here we instruct you the best VR Video Converter for macOS Mojave to make 3D video for VR Headsets.

Why Need A VR Video Converter

We all can have an immersive feeling when watching virtual reality videos. But unfortunately 360 degree VR video resources are limited and some VR videos can’t play. At this time, a VR video converter is urgently in demand. When you have a VR Video Converter, you never need to worry that your ordinary videos, 3D YIFI video or 3D YouTube video can’t be played on Gear VR, Oculus Rift, Sony PlayStation VR or any other VR headsets.

UFUSoft Video Converter for Mac is precisely an excellent VR video converter to convert virtual reality videos on macOS Mojave. It is capable of converting all your non-VR video files to a VR SBS format supported by VR heasdet, changing a VR video format/resolution to be available to VR Players, or transcoding a virtual reality SBS video to 2D normal format for playback on Mac, iPhone, iPad, Android, etc. The most important is that this macOS Mojave VR converter delivers a super fast speed for virtual reality video conversion with almost original quality reserved.

1. Install and run the ideal VR video converter for macOS Mojave you like.

2. Then you add the video files you want to convert.

3. Once you’re done adding the video files, the next step takes you to the conversion format page: simply put, select 3D Video format/modes or the device for which you want the video to be converted. In our case, 3D SBS video is highly recommended for perfectly playing on Gear VR, Oculus Rift, VR One, Google Cardboard, etc. 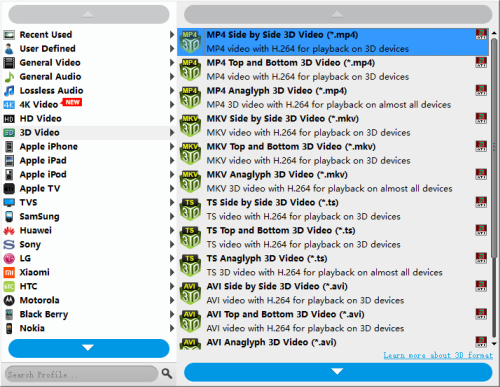 Usually, for some VR Headsets like Google Cardboard, the best VR video format depends on the the devices it connect. For example, if you play a 3D video on Google Cardboard with iPhone 6, you’d make sure your 3D video is 3D MP4, 3D MOV, 3D M4V. But for Android mobile phone, you can play 3D 3GP, 3D MP4, etc on Cardboard. This adapts to many VR headsets in the market, like Freely VR, Sony Morpheu, PLAY VR, etc.